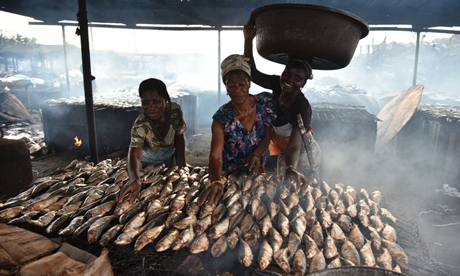 In Côte d’Ivoire, as in much of West Africa, smoked fish plays a major role in the everyday diet. It is popular among locals not only for its taste and nutritional benefits, but also for its competitive pricing.

Women carry out he work to smoking fish in areas that are dark and poorly ventilated, are are used for the cleaning and post-harvesting work. This is the area where the smoking ovens are kept, and is filled with thick smoke throughout the day as the women work to smoke the fish they will later sell in the markets.

There are significant health problems  arising from the smoke from the traditional ovens and techniques used in preparing smoked fish. “Traditional smoking releases contaminants known as polycyclic aromatic hydrocarbons (PAHs), which are carcinogenic and hazardous to the human respiratory system,” says FAO Fishery Industry Officer Yvette Diei-Ouadi. This leads to respiratory, eye and other health problems, not only for the women but also for their children, who are often present while their mothers work at smoking the fish.

Now, FAO with the Centre for Fisheries and Aquaculture Technicians in Senegal (CNFTPA) has introduced toCôte d’Ivoire and other West African communities a new FTT fish smoking technology (also known as Thiaroye or FTT-Thiaroye). The system, consisting of a dual-function oven and mechanical drier (which also acts as a storage unit), is specifically designed to help small-scale fish processors prepare and market safe, high-quality food.

The introduction of the FTT-Thiaroye system is a gender-sensitive technique that can be used and maintained easily by women fish processors. By reducing drying and smoking times, and producing a product that sells more readily and rapidly the new technology increases the time available to women for other pursuits, including caring for the household and children. A more marketable product also fetches premium prices, meaning increased income for the women who produce smoked and dried fish.