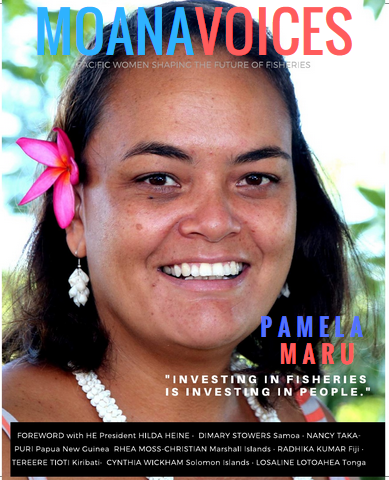 Moana Voices is a new Pacific Islands Forum Fisheries Agency (FFA) annual publication featuring the profiles of eight Pacific women involved in fisheries at a national, institutional and region level. The publication aims to increase women participation in the field. It was launched on International Women’s Day, March 8 and is an initiative of the GEF OFMP2 project implemented by FFA. These women tell their stories of what drove them towards a career in Fisheries, if there were any gender issues they had faced, how they overcame challenges or what inspired them to better themselves. 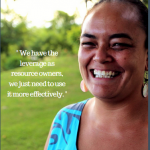 Pamela Maru’s fascination in the ocean was one she had since childhood and it was this fascination coupled with inspiring people along the way that led her to a career in the tuna industry where she is currently a fisheries management advisor to FFA in the Solomon Islands. Her mentors never made her feel less capable or different just because she is a woman. Although, she had some interesting experiences when she started out her carrier such as being ignored by the fishing crew during vessel inspections and that her place as a fisheries officer was to take her instructions from the guys. These issues that she faced were addressed with help of her co-workers. Due to safety concerns, she was held back from maritime patrols, today she is happy to see more women involved in maritime patrol, observer and crew work. 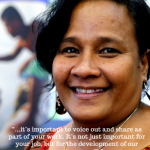 Tereere Tioti, her career and education has revolved around fisheries such as being part of the competent authority team that inspect fish for processing in Kiribati where she was glad that her hands on practical work could also be applied in her own household making sure her family gets good quality fish. She believes that education gave her the power to step outside of what tradition normally views the roles of women to be.  Through her journey as a woman in Fisheries, she has come to certain realizations where having your own views isn’t enough, you also need the courage to voice your views so that it is heard. She sees herself continuing her work in fisheries, and then after with all the knowledge she gained from studies and her work she wishes to help her country in Fisheries by becoming a member in parliament. 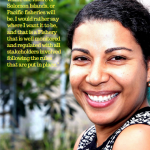 Cynthia Wickham, who has spent almost a decade in Fisheries and is currently working in the Tuna Industry in the Solomon Islands. Her passion and the opportunities that came her way was how she become more involved in the sector. In relation to gender issues, she hasn’t or never noticed any negative situations pertaining to her gender in her career. On the other hand there have been occasions whereby she was the only female and people would try to make her feel more comfortable. 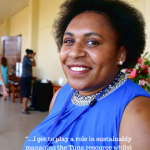 Nancy Taka-puri finds her role to be rewarding. She is involved in managing tuna sustainably while making sure that maximum economic value is the outcome. However, her work when it involves her attendance in Tuna Commission meetings has meant up to two weeks away from home. Being able to keep in contact with her family makes her time away from home easier. 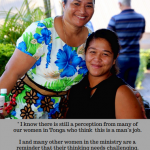 Losaline Loto’ahea and her 22 years working for Fisheries has seemed more like a life time since she spent her childhood traveling with her father who assisted in establishing and growing the fisheries industry in Tonga. It was this early introduction into fisheries that got her hooked and become her natural choice of work. She acknowledged the perception by many women in Tonga that such a field is a man’s job and it is women like Losaline Loto’ahea that are challenging such perceptions. Enforcement is her favorite part of her work, she has led operations that has led to the seizer of illegally caught catch. 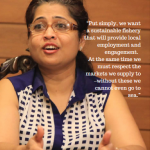 Radhika Kumari started her professional career as an accountant at a local fish processing company in Suva. This introduction into the Fishing Industry gave her a lot of room to advance where she transferred to Solander and eventually an executive position in the group. She doesn’t see gender to be an issue when management is concerned although there times when she is the only women present that she feels a little lonely. So far there are three women who occupy the top five executive positions. 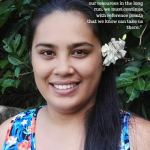 For Dimary Stowers, Fisheries wasn’t her first choice but she quickly took to the field and is glad with how things turned out. She started her Fisheries work in Samoa and now heads into work with the Ministry of Marine Resources in the Cook Islands. Her work gives her a sense of purpose enabling her to contribute to both local and national economies. 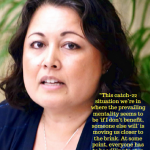 Rheamoss Christian wouldn’t have picture herself working for Fisheries 20 years ago, and was a career she got into by accident and stuck to since. Today, she is a special advisor on Oceans and Trade, she also serves as the chair of the WCPFC which she does so unpaid. In her career she has felt that her gender or age at times resulted in her not being taken seriously. At 22, she was one of five women at her first regional fisheries meeting.

Source: This article and its contents are based on the profiles found in MOANAVOICES2017