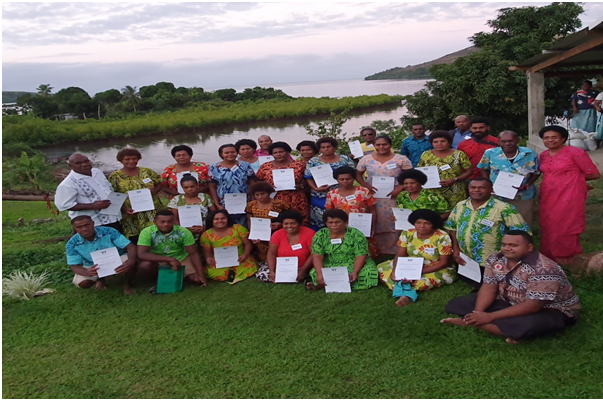 The WiFN-Fiji is proud to have been one of the three organisations to have undertaken the Rapid Care Analysis (RCA).

With technical and financial support received from Oxfam, the assessment was carried out in the Nakorotubu and Navolau district in Ra on the 19 – 28 August, 2019.

The RCA was aimed at achieving four key objectives:

A feedback visit was also organised to present and validate the findings for the RCA in early November.

This RCA targeted villages where women engaged in fisheries and handicraft which includes five villages; Navolau 1, Navolau 2 Namuaimada and Nakorokula of Navolau district and Saioko village of Nakorotubu district in the province of Ra in Fiji. Navolau and Nakorotubu districts are two of the twenty districts in the Ra province. There are four villages in the Navolau district and five in Nakorotubu. Their main sources of livelihood are in the informal sector – fishing, farming root crops, handicraft production as well as formal employment in the sugar cane and hotel industries and public sector.

From the RCA findings it was concluded that on average a woman in Navolau and Nakorotubu districts spends double amount of hours per week on performing unpaid care work than a man but less time for leisure relative to a man. This unequal distribution of unpaid care work is due to gender disparity, limited access to proper infrastructure such as access to water piping, lack of proper sanitation, not enough fishing boats and gears for women and heavy reliance on once source of livelihood such as fishing, gleaning of sea-grapes and farming to cater for subsistence and source of income.